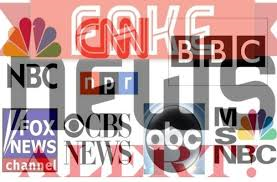 CNN's Brian Stelter "broke" the news in early March, warning that a "promotional campaign that sounds like pro-Trump propaganda" would be hitting local TV stations. The statement reported by CNN was crafted by Sinclair Broadcast Group, the biggest owner of television stations in the United States. A Seattle Post Intelligencer report provided the script that had been given to KOMO News, which is owned by Sinclair:

(B) Our greatest responsibility is to serve our Northwest communities. We are extremely proud of the quality, balanced journalism that KOMO News produces.

(A) But we're concerned about the troubling trend of irresponsible, one sided news stories plaguing our country. The sharing of biased and false news has become all too common on social media.

(A) Unfortunately, some members of the media use their platforms to push their own personal bias and agenda to control 'exactly what people think'…This is extremely dangerous to a democracy.