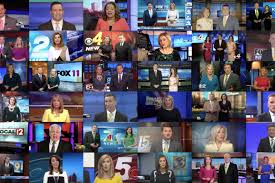 It's no secret that members of the media use their own personal agenda's and bias to beam out specific messages to the masses, this is something that everybody can agree on. It's been done since the inception of media and has since grown into a massive brainwashing tool, one which now influences the masses on a collective scale. This is why we see so much information from mainstream media outlets, regarding major events, that is completely contradicted by other news outlets and sources. Too often, the source of information from mainstream media outlets is their "intel," and we simply believe what we are hearing without question.

This is also why we see members of the media themselves, like journalists, come out and "blow the whistle," so to speak. Here is an article I published earlier of 3 popular mainstream media journalists coming forward expressing that these outlets are constantly told what to say, and how to say it from corporate and government/intelligence agency sources.

A declassified document from the CIA archives in the form of a letter from a CIA task force addressed to the Director of the Central Intelligence Agency, details the close relationship that exists between the CIA, mainstream media and academia.

The document states that the CIA task force "now has relationships with reporters from every major wire service, newspaper, news weekly, and television network in the nation," and that "this has helped us turn some 'intelligence failure' stories into 'intelligence success" stories,' and has contributed to the accuracy of countless others." Furthermore, it explains how the agency has "persuaded reporters to postpone, change, hold, or even scrap stories that could have adversely affected national security interests or jeopardized sources and methods."

This is from years ago and still continues to this day.

With all this being said, not all stories are fake, but those that can have such political and economical impacts, seem to be tinkered with on many occasions.

The MSM Is Using Left-Right Divide To Conquer Us All!