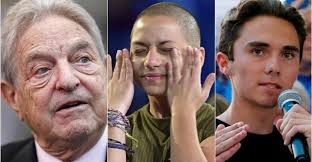 The so-called "March For Our Lives" movement, which has the backing of front groups for establishment billionaires such as George Soros and Michael Bloomberg, intends to exploit traumatized children to advance further restrictions on gun rights and the Second Amendment following the school shooting in Parkland, Florida. One of the "leaders" of the phony grassroots movement urged college students to "join the revolution," too. Patriotic Americans and those concerned about children must expose the scam.

On March 14, anti-gun students duped into demanding that their own rights be infringed upon plan to walk out of class for 17 minutes at 10 a.m. Then, on March 24, and again on April 20, anti-gun students are also planning marches, including one in the nation's capital. All over the country, establishment-owned newspapers are hyping the "student" marches while ignoring the pro-gun students speaking out. Estimates by organizers suggest as many as 500,000 people might march on D.C. to demand further assaults on their freedom. Authorities in some jurisdictions are even forcing teachers to participate in the protests, according to news reports. And a number of celebrities known for hostility to gun rights are expected to attend, including TV "comedian" Jimmy Kimmel, infamous for hosting the least-viewed Oscars ever.