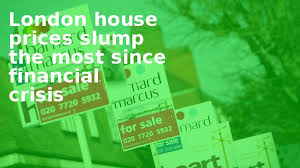 The average price of a home in the capital dropped to £593,396 ($822,447) in the three months to January, down 2.6% from the same period last year, according to a report by data provider Acadata out on Monday. In comparison, house prices across all of England and Wales rose 0.7% during the period, with the biggest jump seen in the North West.

"This is the steepest annual rate of decline in London prices since August 2009, during the last housing slump, which was itself associated with the banking credit crisis of 2008/09," Acadata said in the report.

"On the basis of housing transactions, it certainly suggests that the concept of a Northern powerhouse to rival London has already begun to emerge, and one that is being built on the back of relatively affordable housing."