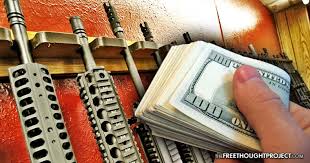 As calls for gun control increase among the parties that claim it would put an end to mass shootings, an investigation is revealing that state sheriff's deputies are taking the firearms they have seized from individuals and re-selling them to generate revenue—only to find that some of the guns go on to be used in other crimes.

According to the results of an investigation reported by the Associated Press, in the state of Washington alone, "more than a dozen of the guns sold by law enforcement since 2010 ended up in new crimes."

The firearms are also typically sold to arms dealers in large batches, with a recent lot of 331 guns being transferred from the Washington State Patrol to a gun dealer in Knoxville, Tennessee. Included in that batch were at least five assault rifles.

Not only are state police re-selling firearms, they are selling them at cheap prices, ensuring that they will continue to receive revenue in return for the items they obtained for free. As the investigation noted, while a new AR-15 costs between $650 and $950 online, the Thurston County Narcotics Task Force auctioned two of the firearms for $250 and $370 each.

The ArmaLite Rifle, or AR-15, has recently become the most demonized firearm of the moment after it was reportedly used in a school shooting in Parkland, Florida, and while the AP investigation includes the gun in its list of "assault rifles," it should be noted that the AR-15 does not have select-fire capabilities and by definition, is not an assault rifle.