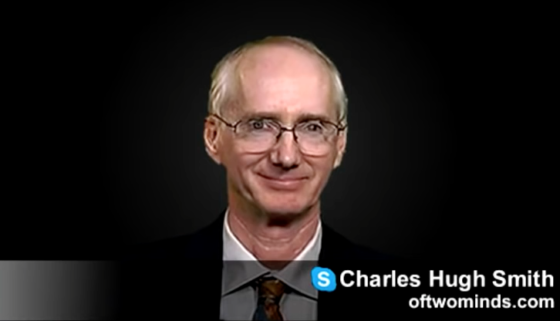 Financial writer Charles Hugh Smith recently sat down for an interview in which he boldly declared that ALL currencies – not just the United States dollar -will see a catastrophic drop during the coming economic collapse. It's not just the dollar, but every currency backed by government force will fall.

In a video interview with USA Watchdog's Greg Hunter, Smith details the eventual collapse and says currencies such as the Chinese yuan will also drop. Smith, the author of the new book Money and Work Unchained and founder of the popular site OfTwoMinds.com says, "All these currencies, by which there is nothing backing the currencies except the government's force. That's the yen, the euro, the dollar and the Chinese yuan. They are all going to have a catastrophic drop against real assets because they are all based on too much leverage, too much debt, too much money being pumped into the financial system that ends up in unproductive speculation. You can't grow your debt at six times the rate of your economy. In other words, if you are creating $6, $8 or $10 of debt to eke out $1 of low productivity growth, you are dooming your currency, and all currencies are doing the same thing. All the currencies are going to take a big drop at some point . . . relative to real stuff. Real stuff is commodities we need: water, grains, food, oil, natural gas, and of course, precious metals. Everybody knows they have been money for 5,000 years, and I personally feel there is a role for cryptocurrencies."