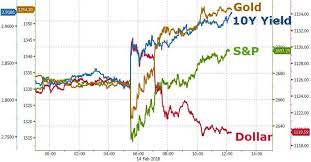 It was a plea for help: as we reported on Wednesday afternoon, a macro trader at one of the world's biggest banks virtually lost it after watching yesterday's bizarre market response to a blistering CPI report - which paradoxically sent yields and stocks soaring even as the dollar tumbled - a reaction which makes zero sense in any rational universe - and penned the following note:

So somehow we have embraced the theme that was with us through January. On a day when inflation beats in the US (incidentally retail sales missed):  stocks are up, yields are up and the USD lower does not add up. On the inflation side, that fact that Central Banks, especially the Fed, may need to be more aggressive, certainly makes some of the conditions suggested above, questionable at best.  So does US curve steepening. When the layers of the onion get peeled away, EM and commodity currencies will have a lot to think about as yields push up. I completely disagree with some of the USD moves, especially AUD and CAD. Rates in the US look ready to extend.  Wake up folks, it is not risk positive.

We commiserated with the author, because his frustration was logical and understandable: the various asset classes all responded in a way that made no sense when juxtaposed side by side.

It is this juxtaposition that also prompted the following snyde note from Bloomberg macro commentator and former Lehman trader, Mark Cudmore, who nailed it in saying that "It's not that any individual asset class looks irrational in isolation, it's just that the combination of narratives across assets aren't compatible."

Below is his full note which if nothing else, should comfort traders who were caught offside by the market yesterday and - by the looks of futures this morning - today as well, and that little makes sense when the machines have taken over.

There's Pain Coming. It's Just Not Clear for Whom: Macro View

Financial assets are trading on dissonant themes. That won't sustain for too long so at least one sector is due some volatility in the days ahead.

It's not that any individual asset class looks irrational in isolation, it's just that the combination of narratives across assets aren't compatible.

Equities are rallying on the argument that inflation remains in the Goldilocks zone -- no risk of deflation, but the climb in prices isn't fast enough to trigger any major Fed aggression. And the ramp up in fiscal stimulus and tax reform will encourage inflows into U.S. stocks.

The Stock Market and Gold are Up, Why?

Market Friday: Can't Hide the Deflation When Deflation is the Plan

"This Is A CDO": Cerberus Selling $300MM In "Potentially Worthless"--

JPMorgan: "A Trump Win Would Constitute A Big Surprise For Markets"