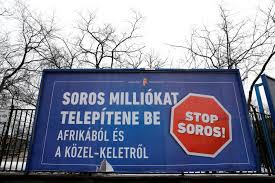 The government says the bill, which would also impose a 25 percent tax on foreign donations to NGOs that back migration in Hungary, is meant to deter illegal immigration Orban says is eroding European stability and has been stoked in part by Soros.

Hungary and Poland are both under nationalist governments that have clashed with the European Union leadership in Brussels over their perceived authoritarian drift deviating from EU standards on democracy and rule of law.

But Orban's message, championing conservative Christian beliefs and rejecting multiculturalism, has gone down well with Hungarian voters and his Fidesz party is expected to secure a third straight term in a general election due on April 8.

The bill says that NGOs that "sponsor, organize or support the entry or stay of third-country citizens on Hungarian territory via a safe third country to extend international protection ... qualify as organizations supporting migration".

Such activity - including campaigning, advocacy, recruiting volunteers, producing information booklets - would have to be approved by the interior minister, who could deny permission if he saw a "national security risk".

Hungary's Orban Prepares to Give Up Coronavirus Powers