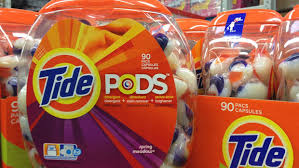 Instead of focusing on why attention starved millennials are ingesting tide pods and posting videos them to the internet, the state is moving in with a law to make them not look so delicious.

In a testament to the decline of society, late last year, people began eating laundry detergent in the form of Tide Pods in some desperate plea for attention and posting videos of themselves doing so online. Sadly, it appears that people will go to great lengths to achieve YouTube views and social media likes—even if it kills them.

Now, instead of realizing the underlying problem in society that may be causing this issue and perhaps pushing this topic of conversation to the forefront, the nanny state is stepping in to attempt to regulate this depravity out of existence. How does the state plan on quelling the asinine ingestion of dangerous soap? By punishing the manufacturers, of course.

According to the government, people are eating Tide Pods because they look so appealing. While it is true that many of the people who've gone to the emergency room for eating Tide Pods have eaten them accidentally, making them less "delicious looking" is hardly a solution. How about parents read the label that says "keep out of reach of children"?

Apparently, reading the label is too difficult and we need the all-loving state to step in and save us.

The lawmakers also want the pods to be made less colorful, claiming that their bright colors "can make them appealing to young children, adults with dementia, and those looking to take part in the internet trend known as 'Tide Pod Challenge.'

Answering back, Proctor & Gamble weighed in, noting the impact the extra packaging would have on the environment. According to the report: