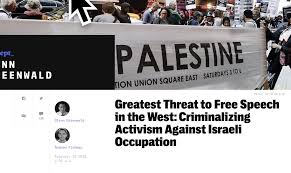 THE U.K. GOVERNMENT today announced that it is will be illegal for "local [city] councils, public bodies, and even some university student unions … to refuse to buy goods and services from companies involved in the arms trade, fossil fuels, tobacco products, or Israeli settlements in the occupied West Bank." Thus, any entities that support or participate in the global boycott of Israeli settlements will face "severe penalties."

This may sound like an extreme infringement of free speech and political activism — and, of course, it is — but it is far from unusual in the West. The opposite is now true. There is a very coordinated and well-financed campaign led by Israel and its supporters literally to criminalize political activism against Israeli occupation, based on the particular fear that the worldwide campaign of Boycott, Sanctions, and Divestment, or BDS — modeled after the 1980s campaign that brought down the Israel-allied apartheid regime in South Africa — is succeeding.

The Israeli website +972 reported last year about a pending bill that "would ban entry to foreigners who promote the [BDS] movement that aims to pressure Israel to comply with international law and respect Palestinian rights." In 2011, a law passed in Israel that "effectively ban[ned] any public call for a boycott — economic, cultural, or academic — against Israel or its West Bank settlements, making such action a punishable offense."

But the current censorship goal is to make such activism a crime not only in Israel, but in Western countries generally. And it is succeeding.

THIS TREND TO outlaw activism against the decades-long Israeli occupation — particularly though not only through boycotts against Israel — has permeated multiple Western nations and countless institutions within them. In October, we reported on the criminal convictions in France of 12 activists "for the 'crime' of advocating sanctions and a boycott against Israel as a means of ending the decadeslong military occupation of Palestine," convictions upheld by France's highest court. They were literally arrested and prosecuted for "wearing shirts emblazoned with the words 'Long live Palestine, boycott Israel'" and because "they also handed out fliers that said that 'buying Israeli products means legitimizing crimes in Gaza.'"

As we noted, Pascal Markowicz, chief lawyer of the CRIF umbrella organization of French Jewish communities, published this celebratory decree (emphasis in original): "BDS is ILLEGAL in France." Statements advocating a boycott or sanctions, he added, "are completely illegal. If [BDS activists] say their freedom of expression has been violated, now France's highest legal instance ruled otherwise." In Canada last year, officials threatened criminal prosecution against anyone supporting boycotts against Israel.

In the U.S., unbeknownst to many, there are similar legislative proscriptions on such activism, and a pending bill would strengthen the outlawing of BDS. As the Washington Post reported last June, "A wave of anti-BDS legislation is sweeping the U.S." Numerous bills in Congress encourage or require state action to combat BDS.

Eyal Press warned in a must-read New York Times op-ed last month that under a Customs Bill passed by both houses of Congress and headed to the White House, "American officials will be obligated to treat the settlements as part of Israel in future trade negotiations," a provision specifically designed "to combat the Boycott, Divestment, and Sanctions movement, a grass-roots campaign." But as Press notes, under existing law — which is almost never discussed — "Washington already forbids American companies to cooperate with state-led boycotts of Israel."