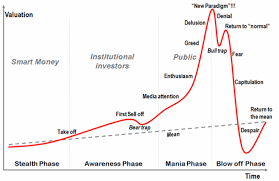 You could say thank heavens they have finally stopped buying the "dip". Then again, there apparently aren't any left!

That's the case, anyway, even if your notion of a "dip" is any day the market doesn't go up. So far there has been exactly one such occasion during 2018. Or worse still, if you assume the traditional metric of at least a 5% drop, you have already been out of the dip buying business for a lifetime—- whether measured in market lives or even dog years.

That's right. Heisenberg reminds us this morning that we are in undisputable record territory. It has been fully 395 trading days since the market had a 5% drop, and that's never happened before in all of recorded history.

Then again, the central banks of the world had never even dreamed of snatching $22 trillion of fiat credit from thin air prior to 1995, either. But in the nine years since the financial crisis they generated $14 trillion of new footings and more than $20 trillion during the last three bubble cycles combined.

Needless to say, this $20 trillion emission of something for nothing has deformed and poisoned the entire warp and woof of the global financial system. Everywhere financial asset prices have been massively inflated and falsified, causing a two-phase distortion of the global economy.

Initially, massive money printing by the Fed fostered defensive currency market interventions (i.e. "dirty floats") and exchange rate suppression by the PBOC, BOJ, BOK and other exporters of both commodities and industrial goods. Buying in dollars to sequester in their own central banks, the mercantilist exporters of the world—including the dollar-linked petro-states—essentially imported the US dollar inflation.

So doing, of course, they expanded their own monetary bases and domestic credit systems with reckless abandon. That led, in turn, to a monumental global CapEx boom funded not by real money savings, but directly and indirectly by the prodigious fiat credit emissions of the mercantilist central banks. Accordingly, capital spending by worldwide publicly traded firms increased by 5X during the decade ending in 2012.

Ultimately that tsunami of cheap capital funded monumental excess capacity in global mining, energy, shipping, manufacturing and distribution industries and mobilized hundreds of millions of subsistence workers from the rice paddies and village economies of Asia into the globally traded markets. The resulting China Price for goods and India Price for internet-based services, in turn, resulted in a massive flattening of the global labor cost curve.

Together, excess industrial and labor capacity ushered in an era of global commodity and industrial price disinflation that led to an utterly perverse reaction function among the Keynesian central bankers. That is, the only lesson they ever learned after the last remnant of real money was destroyed when Nixon trashed the Bretton Woods gold-exchange standard at Camp David in August 1971 is that too much monetary expansion leads to a rising and ultimately punishing CPI.

But the central bankers have not seen much CPI inflation in the present money printing era—especially after authorities sawed off the inflation ruler in the 1980s and 1990s via statistical tricks such as hedonics, geometric mean adjustments and imputations like homeowners equivalent rents in lieu of actual, measurable housing prices. So they perceived a green light to print central bank credit at will.