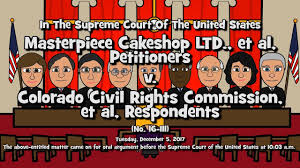 The Supreme Court heard oral arguments last month in the case of Masterpiece Cakeshop, Ltd. v. Colorado Civil Rights Commission. Jack Phillips, the owner of Masterpiece Cakeshop in Lakewood, Colorado, is a Christian who believes that marriage is the union of one man and woman. As such, he refused to make a cake for a same-sex wedding. The case is widely considered to be one of the most important free speech cases in years. Yet, the views of the First Amendment held by defenders of Mr. Phillips are half-baked.

Briefly, here are the facts in the case, taken mainly from the decision against Phillips by the Colorado Court of Appeals.

In 2012, David Mullins and Charlie Craig, a homosexual couple, visited Masterpiece Cakeshop to order a wedding cake. Although they were going to be married in Massachusetts (same-sex marriage was not yet legal in Colorado), they wanted a wedding cake for a reception in Colorado. Because Phillips believes that decorating cakes is a form of art, that he can honor God through his artistic talents, and that he would displease God by creating cakes for same-sex marriages, he declined, telling the couple that he does not create wedding cakes for same-sex weddings because of his religious beliefs, but advising them that he would be happy to make and sell them any other baked goods. Phillips has likewise declined to make cakes with profane messages or that celebrate Halloween.

The unhappy couple then filed charges of discrimination with the Colorado Civil Rights Commission, alleging discrimination based on sexual orientation under the Colorado Anti-Discrimination Act (CADA). After an investigation, the Division issued a notice of determination finding probable cause to credit the allegations of discrimination. Craig and Mullins then filed a formal complaint with the Office of Administrative Courts, alleging that Masterpiece had discriminated against them in a place of public accommodation because of their sexual orientation in violation of section 24-34-601(2), C.R.S. 2014. An administrative law judge issued a lengthy written order finding in favor of Craig and Mullins, which was affirmed by the Commission. The decision was appealed to the Colorado Court of Appeals, which affirmed the Commission's decision in 2015.

the Commission's cease and desist order compels speech in violation of the First Amendment by requiring it to create wedding cakes for same-sex weddings.

the Commission's order unconstitutionally infringes on its right to the free exercise of religion guaranteed by the First Amendment of the United States Constitution.

However, the Court concluded: