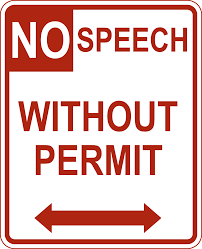 I won't pretend that I particularly enjoy impromptu religious sermons in public places. But regardless of my personal feelings, I believe people have the right to free expression, including religion and speech.

But live and let live is apparently not the philosophy of New Jersey cops. When they saw two people preaching on the property of the New Jersey Transit system, they had to step in. The Transit officers said that they asked for the preachers' identification because they were not behaving like normal commuters.

When the officers asked Karns and Parker for valid identification, neither complied. The officers then arrested the ministers on charges on obstruction for their refusal to show the officers ID. The two preachers were also charged with defiant trespass for preaching without a permit.

What makes this different from most free speech cases is the arguments that the government used to justify their behavior. You need a permit to preach in public. How do they define preaching? To many, talking politics sounds a lot like preaching.

And why should you need a permit to practice your right to free speech or religion in public? By what standard does the government deny permits? The government can charge money for the privilege of exercising a right.

The charges were dismissed. A cop is supposed to have probable cause when they ask for an ID.

The preachers sued, arguing they were deprived of their right to free expression. They also claimed they were discriminated against on the basis of religion.

But true to form, the New Jersey government closed ranks and doubled down on their position. As a state agency, New Jersey Transit argued that they have immunity from civil claims of rights violations.

Yeah, why should anyone be able to petition the government for a redress of grievances? Their argument is, "We can do whatever we want because we are the government."

And the worst part is, a U.S. circuit court of appeals agreed with the state of New Jersey. They said state permitting laws trump basic rights like free speech.