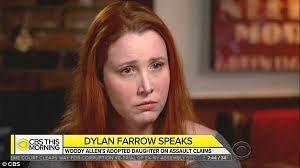 Dylan Farrow, adopted by Woody Allen and Mia Farrow, described in graphic detail for the first time on TV how the director allegedly assaulted her in 1992

Claims she, as a seven-year-old, was told to lie down and play with her brother's toy train while he 'touched my private parts'

Allen, 82, denied the 'discredited' allegations, claiming Dylan had been brainwashed by her 'angry' mom Mia Farrow after their 'contentious breakup'

'I never molested my daughter – as all investigations concluded a quarter of a century ago,' he added

'He's lying, and he's been lying for so long,' Farrow shot back in the second part of her TV interview with Gayle Kind today