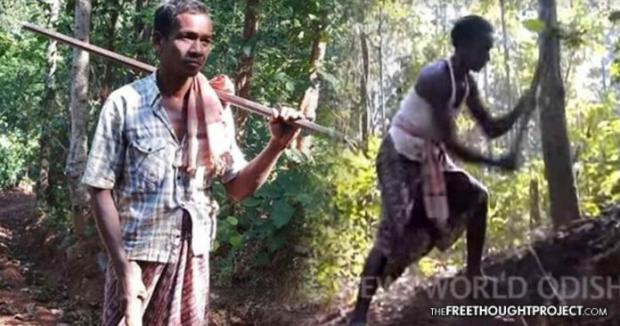 Government told him if he wanted access to town, he'd have to move. So, this incredible man and father built his own road.

A dedicated father in Kandhamal, India has created positive waves around the world for single-handedly constructing a five-mile-long road to connect his village to the main road in the next town—so his sons could be the first people in his family to attend school.

One of the most oft-repeated arguments presented in favor of the necessity of taxation is that of roads.

"But who would build the roads?"

This question has been asked repeatedly by those who defend taxation as a means to facilitate human travel.

All too often, those who make this argument will claim—incorrectly—that government builds roads. However, roads are not built by governments. Roads are built by private citizens who've been given a government contract to build them.

Often times, due to the inherently corrupt nature of government contracts and backdoor deals, the citizens are fleeced as they pay high prices for inexperienced companies to build substandard roads that fail in only a few years.

While substandard products from government contracts may seem like a waste of taxpayer dollars, many times, the money taken from citizens in the form of taxation never even builds those promised roads.

Jalandhar Nayak realized this problem years ago, so he took matters into his own hands. As the Times of India reported, Nayak, a vegetable seller, said that he never had access to education and seeing his children suffer in crossing the area forced him to take this step and clear the hillocks to make a pathway.

"My children found it hard to walk on the narrow and stony path while going to their school. I often saw them stumbling against the rocks and decided to carve a road through the mountain so that they can walk more easily," he told News World Odisha.

1 Comments in Response to Gov't Failed to Help, So Dad Builds 5 Mile Road BY HIMSELF, So His Kids Can Go To School

Too bad he wasn't more educated. If he was, he would have done the schooling himself. Now he doesn't have any excuse when he finds that school is brainwashing his kids. He won't be able to get the school to easily allow their release. The school might even call in government to enforce that the kids MUST go to school for their daily brainwashing.