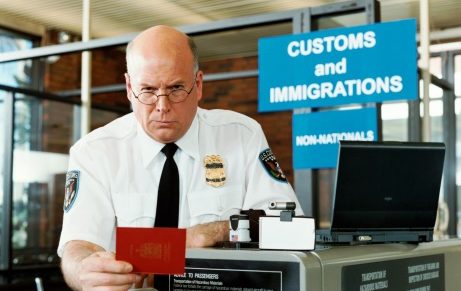 Over 30,000 people had their electronic devices searched without probable cause or a warrant by Customs and Border Protection in 2017. This is a 50% increase from 2016.

Most of the searches took place at airports when travelers were leaving the country. And 80% of those searched were not American citizens.

I happen to think anyone on American soil deserves every protection under the Bill of Rights. But maybe you think foreigners do not qualify for those protections. That still leaves 6,000 Americans who had their rights against unreasonable search and seizure violated by American Customs Agents in 2017.

Imagine the helplessness of having your phone taken by an Agent, and searched without your consent. No suspicion of any crime. No probable cause. Just some thug using brute force to violate your privacy.

In these settings, travelers are powerless. You just want to get home or continue to your destination, but the American police state shakes you down.

Hundreds of traveler complaints about such oppression have now surfaced thanks to a Freedom of Information Request.

Two U.S. citizens and their family were stopped at the Houston airport when returning from a vacation to Guatemala. They reported: "We were separated and individually interrogated . . . including my teenage daughters. All our luggage was searched, all our papers were copied–including newspapers we had picked up in our travels. Our phones and electronic devices (ipad etc.) were taken, searched and all information was copied)–all this without any explanation or accusation. We were advised if we refused such search, that we would be indefinitely detained." [Complaint dated 01/26/13]

It is quite obvious that these searches violate the Fourth Amendment which says the people have the right "to be secure in their persons, houses, papers, and effects, against unreasonable searches and seizures."

Government agents must obtain a warrant based on probable cause specifically "describing the place to be searched, and the persons or things to be seized."

But a lot of good that has done the American people. The government simply ignores those limitations on their power. They justify it based on terrorism.

The Overlapping Infrastructure of Urban Surveillance, and How to Fix It