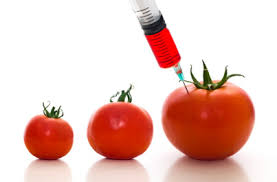 GMOs will quickly dominate the global food chain under a new mantra that gene editing is merely "accelerated breeding technology."  Furthermore, the U.S. Department of Agriculture has bought this brazen lie and states that GMO plants are not "regulated articles" because they don't contain foreign pathogens from bacteria. Thus, the new breed of gene editors will not be regulated, monitored or required to conduct detailed testing, and yet they will contaminate the gene pool of the world's food supply. This is a horribly dangerous combination of greed and a Technocrat mindset that the 'science is already settled.' ? TN Editor

When I visited Jason McHenry's farm in South Dakota, the young farmer, dressed in worn jeans and sunglasses, led me up a slippery steel ladder on the side of a grain bin. We tumbled through the manhole into a shifting mountain of soybeans. You could sift them through your fingers and taste their sweet, cloudy flavor.

The U.S. soybean crop is four billion bushels a year, about 240 billion pounds. It generates the most cash receipts for American farms after cattle and corn. Of those beans, more than 90 percent are genetically modified organisms, or GMOs—that is, they've been genetically enhanced, most often through the addition of a gene from a soil bacterium that renders them immune to the weed killer glyphosate, commonly known as Roundup.

The 4,000 bushels McHenry and I were sitting in, however, represent a new type of plant that's been modified using gene editing. A startup had employed the technology to introduce changes in two genes involved in fatty-acid synthesis, so that oil pressed from the beans is more like olive oil than typical soy oil.

McHenry first heard the pitch for the beans last December, at a hotel near the cooperative of South Dakota soybean processors. "We have something new and exciting," a salesman told the farmers. "You've heard about the ban on trans fats?" Soybean oil has been losing market share since the U.S. government banned unhealthy fats created when soy oil is partially hydrogenated and turns to a solid  (think Crisco). Those fats have been killing people. They're bad food.

Oil from the gene-edited beans could solve that problem, because it doesn't need to be processed in the same way. Any farmer who agreed to plant the beans, McHenry heard, would be part of the wave of innovation filling store shelves with Greek yogurts, green packaging, and healthy ingredients. What's more, it would mean a few quarters more per bushel. "You make a little more money, you have a great experience, and you are part of a revolution," said the pitchman, Thomas Stoddard, a lanky biologist turned seed seller who visited McHenry's farm with me.

To McHenry, a farmer just starting out with his own acres, his own debts, and his own decisions, the pitch made sense. The Roundup-resisting beans his father still plants are expensive. What's more, the tumbleweeds have evolved to survive spraying and grow as high as your waist. "Looking at the market as a whole, Europe and China are questioning GMOs," McHenry says. "You have to keep your finger on what the consumer wants, and as a farmer, you have to differentiate yourself. If you are looking at a market that could be gone, you have to think about alternatives."