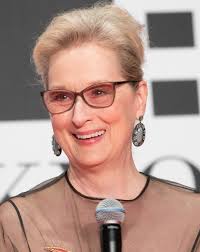 Los Angeles (AFP) - She started the year leading the chorus of opprobrium against President Donald Trump but 12 months on Meryl Streep, multiple Oscar-winner and doyenne of the liberal Hollywood elite, has become a target herself.

The 68-year-old is coming under fire over her denials that she knew about the misconduct of movie mogul Harvey Weinstein, who is alleged to have spent his career sexually assaulting, harassing and intimidating women.

Streep has worked on several Weinstein produced films and jokingly referred to him as "God" at the 2012 Golden Globes.

The pre-eminent actress of her generation, Streep has had a glittering 40-year career that has seen her play everything from a Nazi concentration camp survivor to an ABBA-singing mother.

She earned her first of a record 20 Oscar nominations in 1979 for the Vietnam war drama "The Deer Hunter" and has won the coveted golden statue three times, most recently in 2012 as Margaret Thatcher in the Weinstein-distributed "The Iron Lady."

It was her political activism rather than her acting prowess that grabbed headlines during the last awards season, as she received widespread praise, and some criticism, for a speech at the Golden Globes denouncing Trump.

All eyes turned to the actress again as the Weinstein controversy broke in early October, when Streep spoke out to say she was "appalled" by the "disgraceful" news and had no idea about the allegations.