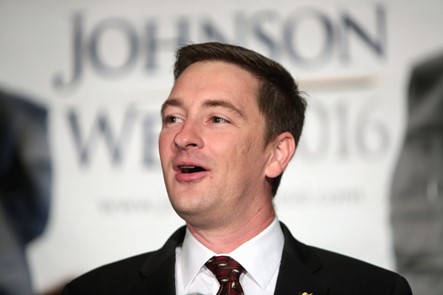 Election after election people in the media throw out spurious assertions that Libertarian Party candidates cause Republicans to lose. So it was little surprise to come across an article published last week with the title "Relieved by Roy Moore's defeat? Thank a Libertarian." What was surprising wat that this article was published at the website of the United States Libertarian Party.

In the article credited as written by party staff, Libertarian National Committee Chairman Nicholas Sarwark is quoted as saying the following in regard to the defeat of Republican nominee Roy Moore by Democratic nominee Doug Jones in the United States Senate special election last week in Alabama: "If you're happy that Roy Moore was not elected to the Senate, thank write-in candidates like Libertarian Ron Bishop."

The article backs up this assertion by noting three factors: first, that the Libertarian write-in candidate and other write-in candidates won a total of 22,780 votes amounting to about 2,000 more votes than Jones' margin of victory over Moore, second, that "[e]ven President Donald Trump acknowledged in a tweet that 'The write-in votes played a very big factor' in determining the outcome," and, third, that "[c]onsidering the slim margin of victory in such a heavily Republican state, though, Bishop probably turned far more voters away from Moore than from Jones."

Second, it does not make sense for libertarians to defer to the authority of President Donald Trump's tweets. Should we expect the Libertarian Party, for example, to start supporting the income tax or the drug war because of something Trump tweets? The party ran a candidate against Trump in 2016 and can be expected to run a presidential candidate again in 2020 irrespective of whether Trump seeks reelection.

National School Choice Week Is Not About Freedom

Thinking About Libertarian Resistance During the Statist Deluge