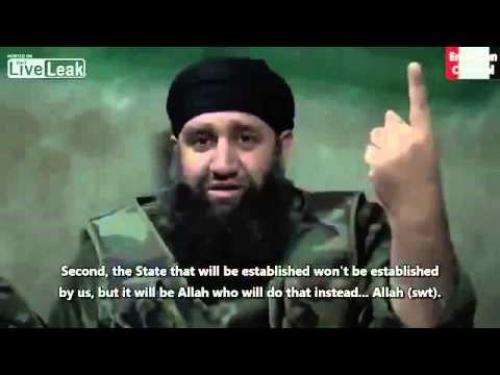 So take the latter and just consider all the harrumphing, chastising and righteous indignation emanating from CNN, NBC and the rest of the fake news gaggle about Trump's knavish re-tweet of the anti-Muslim videos.

To be sure, that was a new low in reckless provocation for even the Donald---given that he presumably could have fat fingered his iPhone to google the "Britain First" thugs who originally posted these dubious videos. So our "America First" president fully deserved all the global rebuke that ensued.

But why in he world didn't the media notice the cat pictured below, who starred in the video which featured a purported Muslim terrorist smashing a statute of the Virgin Mary?

Except he was our Muslim terrorist!

That's right. His name is Omar Gharba al-Khojji and he was CIA recruited, trained and dropped into the battlefield in Syria's Idlib province---practically by Senator John McWar himself, who was the godfather and Senate paymaster of the FSA (Free Syrian Army).