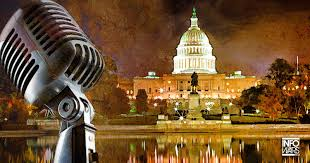 That is the entire field of radio and television. In this area, the federal government, in the crucially important Radio Act of 1927, nationalized the airwaves. In effect, the federal government took title to ownership of all radio and television channels. It then presumed to grant licenses, at its will or pleasure, for use of the channels to various privately owned stations. On the one hand, the stations, since they receive the licenses gratis, do not have to pay for the use of the scarce airwaves, as they would on the free market. And so these stations receive a huge subsidy, which they are eager to maintain. But on the other hand, the federal government, as the licensor of the airwaves, asserts the right and the power to regulate the stations minutely and continuously. Thus, over the head of each station is the club of the threat of nonrenewal, or even suspension, of its license. In consequence, the idea of freedom of speech in radio and television is no more than a mockery. Every station is grievously restricted, and forced to fashion its programming to the dictates of the Federal Communications Commission. So every station must have "balanced" programming, broadcast a certain amount of "public service" announcements, grant equal time to every political candidate for the same office and to expressions of political opinion, censor "controversial" lyrics in the records it plays, etc.