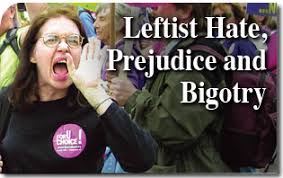 (Natural News) The Left has found a whole new weapon to silence conservative voices: "Hate." The problem is, their hate doesn't count. Only the hate they selectively designate to be "hate" is punished.

According to the Left, "hate" is any criticism of gays, lesbians, transgenders, black people, abortion clinics, Muslims and so on. No thoughtful criticism of such "protected" subjects is allowed, since it's all deemed to be "hate."

Yet at the same time, the Left openly encourages and practices its own hatred against a wide range of targets which are automatically deemed to be "okay to hate." These targets include:

Thus, the Left isn't actually opposed to hate. They fully support hate as long as it's directed to specific political enemies. To further pull off this contortion, of course, they make sure their own hatred is never labeled "hate." Instead, the Left's HATE is called "diversity." And diversity, by definition of the Left, excludes people of white skin color. To further the delusion, this exclusion of Whites is labeled "inclusiveness," while attacks on Christians are labeled "tolerance."

So, Did The Democrats SPRAY The Trump Contingency At "The Debate" With Covid-19?

Left-wing arsonists are setting many of the wildfires in Western states… but why?

Is This a Threat? Biden Strong Suggests the Rioting Will Stop When America Elects Democrats

Trump Supporter Executed Walking Down The Street In Portland, BLM Celebrates And Cheers The Killing