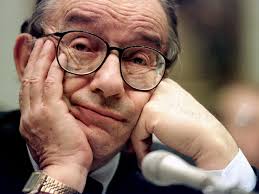 Just recently the notorious former Federal Reserve chairman Alan Greenspan gave his opinion concerning the rise of bitcoin in 2017. The 91-year old Greenspan explains that he believes the decentralized currency is very much like the world's unbacked fiat currencies.

Another high profile economist has an opinion concerning the recent interest in bitcoin this year. Alan Greenspan who served as the Federal Reserve's Chairman from 1987 to 2006 explains on the Fox broadcast "Mornings With Maria" that "bitcoin is what used to be called fiat money." Greenspan thinks that because bitcoin isn't backed by a traditional commodity he believes the decentralized currency is very much like unbacked notes issued in the past.

"I would use the analogy of Continental currency. Continental currency in 1775 was issued with no backing, and it sold at par in the marketplace for quite a while until they started to build up more and more printing of continentals," explains Greenspan on the news broadcast.

Human nature is such that if you get something such as Bitcoin, you think there is some value there whether there is or there isn't.  But that's the same thing as a Continental, greenbacks in the Civil War, all of these currencies which didn't have any backing.

Even though Greenspan spent his career managing the Federal Reserve, which is well known for printing unbacked notes, Greenspan's economic opinions have always been respected. This is likely due to his financial background and his relationship with well-known figures like Ayn Rand. Furthermore, it's not the first time Greenspan has taken issue with bitcoin not being backed or having intrinsic value. Back in December of 2013 when bitcoin markets were rising to $1,000 per BTC Greenspan told the press that bitcoin was "not a currency."

MASSIVE Surveillance State Has Met Its Match! - How Epic Cash Can KEEP Your Privacy SAFE!