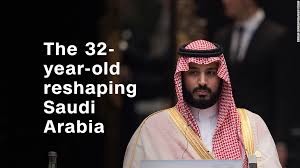 What's going on in Saudi Arabia?  Over 200 bigwigs detained and billions of 'illegal profits' of some $800 billion confiscated.

The kingdom is in an uproar.  The Saudi regime of King Salman and his ambitious 32-year old son, Crown Prince Mohammed bin Salman,  claim it was all part of an 'anti-corruption' drive that has Washington's full backing.

Utter nonsense.  I've done business in Saudi Arabia since 1976 and can attest that the entire kingdom with its thousands of pampered princes and princesses is one vast swamp of corruption.  In Saudi, the entire nation and its vast oil revenues are considered property of the extended Saudi royal family and its hangers-on.  A giant piggy bank.

The late Libyan leader Muammar Khadaffi told me the Saudis are 'an incredibly rich bunch of Bedouins living behind high walls and scared to death of their poorer neighbors.'

We have just witnessed a palace coup in Riyadh caused by the violation of the traditional desert ruling system which was based on compromise and sharing the nation's riches.

Young Crown Prince Mohammed bin Salman's appointment as heir apparent by his ailing father, King Salman, who is reportedly suffering from cognitive issues, upset the time-proven Saudi collegial system and provoked the current crisis.  Among the people arrested so far were 11 princes and 38 senior officials and businessmen, including the nation's best-known and richest businessman, Prince Alwaleed bin Talal, who owns important chunks of Apple, Citigroup and Twitter. He's being detained at Riyadh's swanky Ritz Carlton Hotel.

Interestingly, there are no reports of senior Saudi military figures being arrested.  The Saudi military has always been kept weak and marginalized for fear it could one day stage a military coup like the one led by Colonel Khadaffi who overthrew Libya's old British stooge ruler, King Idris.  For decades the Saudi army was denied ammunition.  Mercenary troops from Pakistan were hired to protect the Saudi royals.

The Saudis still shudder at the memory of British puppets King Feisal of Iraq and his strongman, Nuri as-Said, who were overthrown and murdered by mobs after an  Iraqi army colonel, Abd al-Karim Qasim, staged a coup in 1958.  Nuri ended up hanging from a Baghdad lamppost, leading Egypt's fiery strongmen, Abdel Nasser, to aptly call the new Iraqi military junta, 'the wild men of Baghdad.'

More mysteries arose this tumultuous week. One of Saudi's most influential princes, Mansour bin Muqrin, died in a mysterious crash of his helicopter, an 'accident' that has the smell of sabotage. Another key prince, Miteb, was ousted.  He was commander of the famed 'White Guard,' the Saudi Bedouin tribal army designed to protect the monarchy and a former contender for the throne.  Meanwhile, three or four other Saudi princes were reportedly kidnapped from Europe and sent home, leading to rumors that Saudi's new ally, Israel, was involved.

It appears that Prince Mohammed and his men have so far grabbed at least $800 billion from those arrested to refill the war-depleted Saudi coffers.  Call this a traditional Arab tribal raid – except that no women or horses were seized.

But behind all this lies the stalemated Saudi war against wretched Yemen, the Arab world's poorest, most backwards nation.  Saudi Arabia has been heavily bombing Yemen for over a year, using US-supplied warplanes, munitions, including cluster bombs and white phosphorus, and US Air Force management.  A Saudi blockade of Yemen, aided by the US, has caused mass starvation and epidemics such as cholera.

When I first explored Yemen, in the mid 1970's, it was just creeping out of the 12th century AD.  Today, it's been bombed back into the 6th Century.

Breaking the Empire Means Breaking With the Saudis

Luongo: Breaking The Empire Means Breaking With The Saudis

US alarmed as Saudi lawsuits threaten to expose secrets