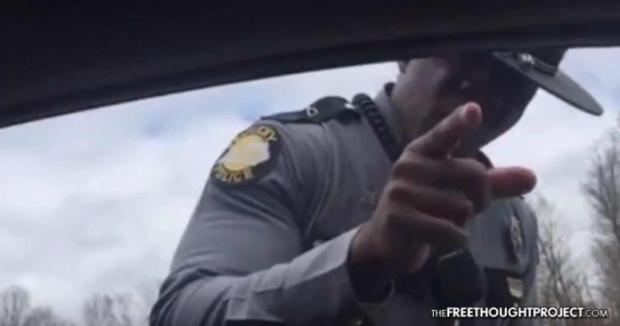 Freedom of speech, in the land of the free, is not guaranteed. Despite the wording of the First Amendment, claiming that "Congress shall make no law…abridging the freedom of speech," there are countless laws across the country designed to do exactly that. However, even when there aren't archaic anti-speech laws on the books, police will all too often deprive people of their freedom — for practicing their freedom and expressing themselves.

Flipping the bird has also been ruled to be free speech many times over. In fact, in a 14-page opinion, the U.S. Court of Appeals for the 2nd Circuit addressed the specific action of flipping off cops when it ruled that the "ancient gesture of insult is not the basis for a reasonable suspicion of a traffic violation or impending criminal activity."

However, we've seen citizens pepper-sprayed, assaulted, and arrested for this act of free speech. And, as the video below shows, police could not care less about protecting your free speech if it's something they don't like.

It has been clearly established that all Americans have the right to record the police as well as flip them off. For an officer of the law to remain willingly ignorant of this precedent is at best, dereliction of duty, and at worst, unlawful deprivation of rights. Either way, this officer was in the wrong.