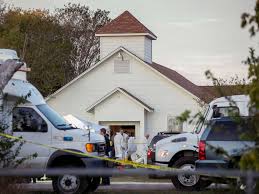 Somebody outside the church had a rifle. He knew how to use it. It will not cost $1 million for the local authorities to try and convict the murderer. There will be no life imprisonment without possibility of parole, and no overturning of that sentence by a parole board. The murderer was transferred to the Supreme Court. I am certain that he has been tried, convicted, and sentenced. There will be no appeal. There will be no parole.

If every man in that church had been packing, fewer people would have died.

If every woman in that church had been packing, even fewer would have died.

It is common for most churches to have a greeter at the door. My church has two greeters at the door. If both of them were visibly packing a pistol next Sunday, I would feel relieved. Two greeters, two pistols. This would be consistent with what Jesus taught:

And he said unto them, When I sent you without purse, and scrip, and shoes, lacked ye any thing? And they said, Nothing. Then said he unto them, But now, he that hath a purse, let him take it, and likewise his scrip: and he that hath no sword, let him sell his garment, and buy one. For I say unto you, that this that is written must yet be accomplished in me, And he was reckoned among the transgressors: for the things concerning me have an end. And they said, Lord, behold, here are two swords. And he said unto them, It is enough (Luke 22:35-38).

I would prefer new greeters. The replacements would be at least six feet two and weigh at least 220 pounds.

I know, I know: this would be regarded as radical. But at some point, if things continue as they have so far, this will not be considered radical.

There was a time in the American West when this was common. A good book on this is Ross Phares' book, Bible in Pocket, Gun in Hand: The Story of Frontier Religion (1971).

I suppose I'm getting ahead of the market. But if there are another 40 or 50 massacres in fundamentalist churches, attitudes may change.

Packing won't ever be acceptable in theologically liberal churches. What they sow, they will reap. A policy of "no active resistance here" is not a good way to avoid terrorism. There is a fundamental strategy of crime prevention: make it more difficult for the criminal to commit his crime against you than somebody else. This is an application of the most fundamental law of economics: when the price increases, less is demanded.

I believe that it is a good policy for Bible-believing churches to adopt an at-the-door policy that visibly announces to terrorists: "You should visit a liberal church."