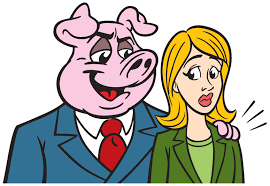 The multiple sexual-harassment allegations against movie producer Harvey Weinstein have sent tremors around the world with newly expressed outrage toward the machismo atmosphere of the film industry and other work environments, including the news business and politics.

Clearly, the problem reaches far beyond Weinstein. Allegations and lawsuits filed against Donald Trump mirror the worst of Weinstein's behavior. Trump's hot-mic 2004 interview with "Access Hollywood" surfaced during last year's campaign, with him bragging about his ability to get away with aggressively kissing women and grabbing their genitals: "When you're a star, they let you do it. You can do anything. … Grab 'em by the pussy. You can do anything."

But even that wasn't enough to keep 63 million Americans from voting for Trump and putting him in the White House, although that was in part because many voters saw no moral superiority in Hillary Clinton, who not only disparaged women who complained about sexual harassment by her husband but who enthusiastically embraced war as a ready option for U.S. foreign policy.

Yet, while the political careers of Donald Trump and Bill Clinton survived disclosures of their predatory behavior, Weinstein's movie empire quickly crumbled after a number of women came forward with accounts of how he used his power to gain sexual favors.