Iodine is essential to your health. Unfortunately, data collected by the U.S. National Health and Nutrition Examination Survey has revealed a significant drop in median urine iodine values.1 The median iodine level measured in urine samples was 320 micrograms per liter (mcg/L) between 1971 and 1974. By 1988, it dropped to 145 mcg/L. Surveys taken in the years since show levels have stabilized, except in pregnant women whose median urine level dropped further to 125 mcg/L.

Many people don't know they need to consume a little iodine each day to maintain healthy levels of this essential micronutrient. Your body uses iodine across several organ systems, but it is most commonly known to synthesize thyroid hormones that regulate nearly every bodily system. Several thyroid hormones secreted by your thyroid gland are transported throughout your body where they control your metabolism and energy production.2

This means that every cell in your body depends on the production and function of thyroid hormones. Your thyroid gland is under the control of your pituitary gland that is located at the base of your brain. In turn, the pituitary gland is under the control of your hypothalamus. In other words, there are several steps needed to identify low thyroid hormone levels and to tell your thyroid gland to begin secreting more.

A recent study published in the British Journal of Nutrition3 evaluated the iodine levels of cow's milk and milk alternatives in search of a potential reason for this growing iodine insufficiency.

Milk Substitutes Are Low in Iodine

Researchers from the University of Surrey evaluated the iodine content in 47 milk alternatives and compared those levels to cow's milk. The researchers included almond, soy, coconut, rice and hazelnut milk alternatives, but excluded products marketed specifically for infant consumption.4 They discovered the majority of brands did not have adequate levels of iodine as compared to cow's milk. Most contained only 2 percent of that found in cow's milk.

Only three milk alternatives were fortified with iodine.5 This means that opting for a milk alternative may increase your risk of developing an iodine deficiency, as the milk alternatives tested only provided 2 mcg per serving,6 while 2 cups of cow's milk will cover your recommended dietary allowance (RDA) of iodine.7

Statistically speaking, you may have difficulty absorbing milk products, which means you would have a negative reaction when you drink cow's milk. According to the U.S. National Library of Medicine, approximately 65 percent of all people have difficulty digesting lactose after infancy.8 Lactose is the sugar found in cow's milk. This intolerance or allergic reaction to the milk sugar is the reason some turn to milk alternatives. Margaret Rayman, professor of nutritional medicine at the University of Surrey, said:9

"Many people are unaware of the need for this vital dietary mineral and it is important that people who consume milk-alternative drinks realize that they will not be replacing the iodine from cows' milk which is the main UK source of iodine. This is particularly important for pregnant women and those planning a pregnancy.

A glass of a milk-alternative drink would only provide around 2 mcg of iodine which is a very small proportion of the adult recommended iodine intake of 150 mcg/day. In pregnancy, that recommendation goes up to 200 mcg/day."

Iodine is an essential micronutrient that helps alkalize your body's pH, provides your thyroid with the necessary nutrients to produce thyroid hormones, protects against cancer and is a natural antibacterial agent. In this short video, iodine expert Dr. Jorge Flechas explains how iodine affects your health well beyond your thyroid gland.

Your thyroid hormones are essential for normal growth and development in children, neurological development in babies before birth and in the first year of life, and in regulating your metabolism.10 Deficiency may be most damaging to the developing brain and could result in miscarriage, preterm birth or neurological impairment in a newborn.

Before moving forward, let's clarify the difference between iodine and iodide. Iodine is the molecule that is taken up by cells in the body. However, iodine is not very available in food and supplements. Iodide, having greater stability, is the form typically found in supplements. In your body, the Iodide molecule is converted into Iodine, which is the active form needed by your thyroid gland.

The RDA is 150 micrograms (mcg) per day for adults, 220 mcg/day for pregnant women and 290 mcg/day for women who are breast-feeding.11 However, as evidenced by dropping levels of median urine levels, most adults are not consuming enough iodine each day to meet the minimum levels required for health.

The American Thyroid Association (ATA) defined iodine deficiency in large populations as urine levels of 50 mcg/L or less.12 These low levels of iodine would likely result in visible symptoms, such as a goiter (swelling of the thyroid gland), hypothyroidism or pregnancy-related problems. More insidious are problems with subclinical deficiency, or levels that can't support optimal health but are not low enough to create immediate life-threatening problems.

Your Risks of Subclinical Iodine Deficiency

Risks of subclinical iodine deficiency are not limited to pregnancy and infant neurological development or weight gain. Nearly 2 billion people worldwide don't get enough iodine in their diet, and 50 million suffer from brain damage caused by the deficiency.13 This may very well be the most preventable cause of brain damage in infants and children, and yet 36.5 percent of children are estimated to have an iodine deficiency.14

Even a small deficiency in an adult's iodine level may reduce your IQ by up to 15 points,15 which may affect your ability to get a job and keep it. Subclinical iodine deficiency is also known as iodine deficiency disorders (IDD) that are subtler than a goiter and may be more dangerous.

Iodine helps prevent oxidative stress that may lead to chronic diseases, such as diabetes, atherosclerosis and arthritis.16 When your thyroid is not fully functional it can also lead to heart disease. Other tissues in your body also use iodine in appreciable amounts, including: 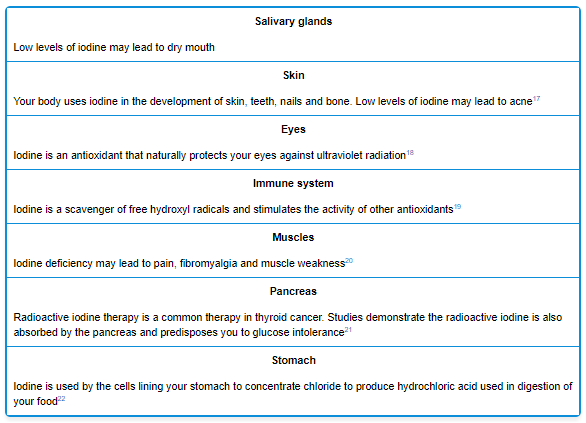 Iodine Protects You Against Cancer

Iodine functions in a protective role against the growth of cancer cells. Although the exact mechanism is unknown, researchers have found that cancer cells shrink after injection with iodine and some die and are then replaced with healthy cells.23 Iodine is also involved in apoptosis, or programmed cell death necessary for the development of new cells and removal of malignant or diseased cells.

The incidence of thyroid cancer has increased worldwide, driven in part by better screening that may pick up small benign tumors, which otherwise would not have caused a medical problem. However, this has also coincided in the U.S. with a reduction of iodine intake.24 Some studies have suggested that prophylactic iodine in deficient populations may reduce the diagnosis of more aggressive forms of thyroid cancer.

Iodine is also vital to breast health in women who are breast-feeding and in older women. A deficiency may lead to fibrocystic disease or breast cancer.25 Human breast tissue and breast milk contain higher concentrations of iodine than your thyroid gland, as iodine is essential to the development of a newborn's brain.

However, it also plays an important role in the health of the breast tissue as it exerts a powerful antioxidant effect. Breast tissue deficient in iodine has elevated markers of lipid peroxidation, one of the early signs of cancer development.26

Breast tissue that is iodine-deficient also demonstrates increases in estrogen receptor proteins and alterations in DNA.27 When a woman's iodine levels are low it stimulates the ovaries to produce more estrogen, which stimulates growth in breast tissue. Iodine also helps regulate cortisol, which is associated with a higher risk of breast cancer.28 When you compare Japanese and Western diets against the incidence of cancers, these differences become even more apparent.

Women are much more likely to develop symptoms of hypothyroidism.33 Edward Toromanyan, chief endocrinologist of the Ministry of Health of Armenia, notes,34 "According to different research, women are having problems with thyroid gland three to 10 times more than men. This also applies to toxic goiter and insufficiency of thyroid hormones."

While women have a greater incidence of iodine deficiency related to their hormone production, everyone experiences poor absorption and utilization related to environmental contamination. Some contaminants that compete with iodine include:

Fluoride is a halogen that has an atomic weight lighter than iodine and can grab receptor sites more easily, thus taking the place of iodine resulting in a deficiency in your thyroid, stomach cells, ovaries and other organs.

Iodine used to be used in processing flour. However, manufacturers have replaced it with bromide, another halogen with a lower atomic weight than iodine.36 This switch effectively reduced your consumption of iodine and injected an element that competes with iodine in your body.

This is a contaminant found in the groundwater across the U.S. and in measurable amounts in milk, fruit and vegetables.37 In high doses, perchlorate may inhibit the function of your thyroid gland, but even in low doses, it inhibits the uptake of iodine by your thyroid gland, leading to hypothyroidism.38

This may interfere with the uptake of iodine in your thyroid.39 Avoid added nitrates you find in processed meats, such as lunch meat, sausage, bacon, hot dogs and some packaged seafood.40

There is evidence that iodine may help detoxify your body of toxic mercury,41 found in fish, dental amalgams and consumer products such as antiques, electronics, batteries, light bulbs and pharmaceutical products.42

Before the 1920s, the Great Lakes, Appalachians and Northwestern regions of the U.S. were known as the "goiter belt," as 26 to 70 percent of children suffered from goiter.43 An iodine prophylaxis program was begun in Ohio in 1917 with over 2,100 school girls. In the following years, the researchers found a significantly decreased frequency of goiter in the girls who received the iodine supplement over those who did not.

It wasn't until 1924, after a successful iodination program in Switzerland and spurred by a series of reports, that table salt was fortified with iodine. However, recent research has found varying degrees of iodine in salt labeled iodized, and 53 percent of the samples had much less iodine than was listed on the label.44 Experts believe the declining levels of iodine in the U.S. population may be the result of several factors, including:

Foods that contain higher amounts of iodine include sea vegetables, such as kelp, kombu and wakame.45 Kelp has the highest amount of any food and just one servings gives you four times the RDA. You can read more about the restorative benefits of kelp in my previous article, "Kelp or Kale: Is Seaweed a Superfood?"

Organic, grass fed butter is another source of iodine and healthy fats in your diet. Grass fed butter is also high in vitamins, glycosphingolipids and conjugated linoleic acids that are important to support your overall health. You can read more about the benefits of grass fed butter in my article, "Butter: This Vilified Daily Food Slashes Heart Attack Risk in Half."