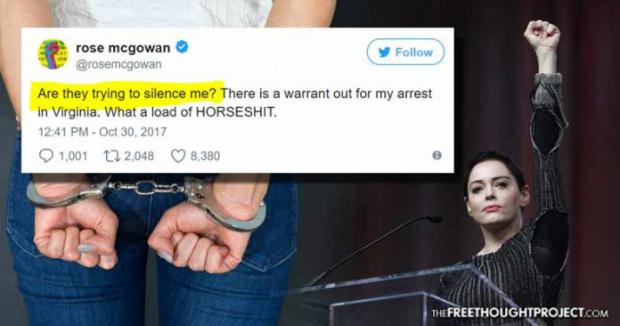 Last week, as TFTP reported, Corey Feldman—after announcing that he had a plan to take down Hollywood pedophiles—was arrested and charged with possession of drugs. This week, Rose McGowan — who has also been vocal in exposing Hollywood's sexual predators— had a warrant issued for her arrest as well.

McGowan has been at the center of the Harvey Weinstein scandal which set off a chain reaction of exposing predators in Hollywood. As the movement to expose Hollywood's dark secret gains traction, more of the elite are being ousted. This week, Kevin Spacey was called out and subsequently apologized for allegedly sexually assaulting Anthony Rapp when he was only 14-years-old.

As the light starts to shine into the dark corners of Hollywood, the predators are running like cockroaches. Could they be so scared that they would use their power and influence to have police go after those who'd dare to call them out? Rose McGowan thinks so.

According to the Associated Press, McGowan is being sought to appear in a Loudoun County, Virginia, court for an incident at Washington's Dulles International Airport on Jan. 20.

Secrets and Scandals of the Vatican