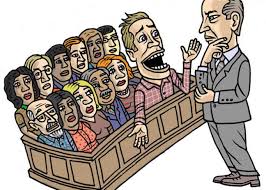 "Do you mean to tell me, that if there was a law against state attorneys using blue pens and you found incontrovertible evidence that I was using blue pens, you could not follow the law and render a guilty verdict based on the evidence alone?" A few years ago, I found myself sitting in a jury booth as a prosecutor questioned me.

The air sucked out of the courtroom as its assembled human beings—including other prospective jurists, a judge, and a defendant—waited for my answer.

"Why would I put a human being in a cage for using a blue pen? That is a nonviolent act and there is no victim, so why would I forcibly confine someone for that?" I continued.

I heard a couple quiet gasps break the tight silence.

"Ok, thank you very much," the state attorney concluded.

Shockingly, I was not chosen to sit on the jury.

CORPUS JURIS SECUNDUM vol 25 section 344, Federal District Courts are courts of record. A court of record has the power to fine or imprison for contempt. It proceeds under the common law, not a statute or a code. The tribunal is independent of the magistrate. - No statutes, cops, lawyers, or judge that is anything more than a spectator, a referee. - Amendment VII: In suits at common law, where the value in controversy shall exceed twenty dollars, the right of trial by jury shall be preserved, and no fact tried by a jury, shall be otherwise reexamined in any court of the United States, than according to the rules of the common law. - Did you catch that? Common law takes the judge out of it, and makes him a referee, only. If he acts as anything else, warn him, and then sue him personally for damages to you in YOUR suit.