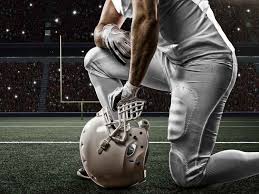 "The constitutionally guaranteed 'freedom to be intellectually … diverse or even contrary,' and the 'right to differ as to things that touch the heart of the existing order,' encompass the freedom to express publicly one's opinions about our flag, including those opinions which are defiant or contemptuous."

Sometimes the public expression of unwanted ideas reaches directly into our living rooms. When President Donald Trump attacked a half-dozen or so professional football players who, instead of standing during the traditional playing of the national anthem prior to football games, "took a knee" by kneeling on one or both of their knees during the anthem, hundreds more players on national television took a knee in defiance of the president.

Here is the back story.

Last year, a quarterback for the San Francisco 49ers, Colin Kaepernick, began quietly taking a knee at NFL games to protest what he said was the excessive use of force by police. He was the subject of mild but largely below-the-radar criticism by those who thought sincerely that taking a knee publicly during the playing of the national anthem was a sign of disrespect for the flag and the anthem and thus for this country.

When a few of his buddies and former colleagues — he is no longer a member of an NFL team — followed suit for a variety of reasons, all of which centered around the right to protest the policies of the government, Trump saw a political opening.

At a rally in Alabama last month, Trump aggressively attacked the practice of taking a knee. He argued that it was so disrespectful to the American flag and the national anthem that those who had taken a knee should be fired from their jobs.

This pronouncement focused a spotlight on the six or so scattered players who had followed Kaepernick's lead, and soon hundreds were doing so. The president took their behavior as an affront to him and to the nation, and he persisted in his attacks on the players. Soon, some team owners joined their players in various means of expressing solidarity with those who had taken a knee.

When the players union backed up these silent expressions of political opinions, it argued that all of its members have a constitutional right to express themselves in uniform in their workplace. Do they? The short answer is that it depends on where the players are when they take a knee.

Some jurisdictions — such as California, the District of Columbia, New Jersey and New York — give more protection to employees for expressive conduct in the workplace than others do. When the expressive conduct — taking a knee, bowing one's head, locking arms with colleagues — occurs in the workplace, the issue is not necessarily one of free speech, because the First Amendment only comes into play when the government itself is accused of infringing upon or compelling speech. In the NFL, the alleged infringers of speech or compellers of speech are team management, not the government.