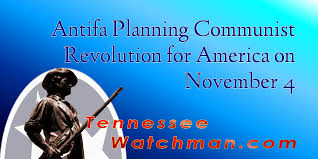 There could be more trouble than we ever imagined headed our way on November 4th when a bunch of folks who aren't happy about Trump and Pence attempt to overthrow the government in a Communist revolution.

Groups like Antifa, Resist Fascism, and the Revolutionary Communist Party have been meeting for months to openly plan sedition and organize what they promise will be massive protests all over the country. Don't be surprised if things become violent. The website says:

We will gather in the streets and public squares of cities and towns across this country, at first many thousands declaring that this whole regime is illegitimate and that we will not stop until our single demand is met: This Nightmare Must End: the Trump/Pence Regime Must Go!

Our protest must grow day after day and night after night—thousands becoming hundreds of thousands, and then millions—determined to act to put a stop to the grave danger that the Trump/Pence Regime poses to the world by demanding that this whole regime be removed from power.

Our actions will reflect the values of respect for all of humanity and the world we want—in stark contrast to the hate and bigotry of the Trump/Pence fascist regime.

Our determination to persist and not back down will compel the whole world to take note. Every force and faction in the power structure would be forced to respond to our demand. The cracks and divisions among the powers already evident today will sharpen and widen. As we draw more and more people forward to stand up, all of this could lead to a situation where this illegitimate regime is removed from power.

Spread the word and organize now. Be a part of making history. Don't let it be said that you stood aside when there was still a chance to stop a regime that imperils humanity and the Earth itself. Join in taking to the streets and the public squares day after day and night after night demonstrating that In the Name of Humanity, We REFUSE to Accept a Fascist America.

On November 4, 2017, we will stand together with conviction and courage, overcoming fear and uncertainty, to insist that: This Nightmare Must End: The Trump/Pence Regime Must GO! (source)

Back in August, I wrote about conferences held across the nation to begin planning these riotsprotests. Conferences were held in New York, Chicago, Austin, Los Angeles, and San Francisco. This is something that has been in the works for months, and basically, every group that is un-American is in on it.

What do they want to replace the Trump/Pence "regime" with?

I'm glad you asked. Their plan is to replace our current form of government with first, Socialism and ultimately, Communism. Clearly they've learned nothing from the brutal collapse of Venezuela.

It says so right in the preamble to their constitution. Oh, wait – I forgot to tell you – they have a draft of a constitution with which they want to replace the governing document of America. It's called, "The Constitution for the New Socialist Republic in North America." Here's a little snippet from the introduction:

It is intended to set forth a basic model, and fundamental principles and guidelines, for the nature and functioning of a vastly different society and government than now exists: the New Socialist Republic in North America, a socialist state which would embody, institutionalize and promote radically different relations and values among people; a socialist state whose final and fundamental aim would be to achieve, together with the revolutionary struggle throughout the world, the emancipation of humanity
as a whole and the opening of a whole new epoch in human history–communism–with the final abolition of all exploitative
and oppressive relations among human beings and the destructive antagonistic conflicts to which these relations give rise.

In order to bring this new socialist state into being, it would be necessary to thoroughly defeat, dismantle and abolish the capitalist-imperialist state of the USA; and this in turn would only become possible with the development of a profound and acute crisis in society and the emergence of a revolutionary people, in the millions and millions, who have the leadership of a revolutionary communist vanguard and are conscious of the need for revolutionary change and determined to fight for it. To work for this objective–to hasten while awaiting the emergence of these necessary conditions, with the goal of revolution and ultimately communism clearly in mind–is the strategic orientation of the Revolutionary Communist Party, USA. (source)

They mince no words when stating that their ideal is a dictatorship.

The New Socialist Republic in North America is, like all states, a form of dictatorship–the dictatorship of the proletariat–which means that, in its essential character and its basic principles, structures, institutions and political processes, it must give expression to and serve the fundamental interests of the proletariat, a class whose exploitation is the engine of the accumulation of capitalist wealth and the functioning of capitalist society and whose emancipation from its exploited condition can only be brought about through the communist revolution, with its goal of abolishing all relations of exploitation and oppression and achieving the emancipation of humanity as a whole. In accordance with this, the 4 Constitution for the New Socialist Republic in North America (Draft Proposal) governing bodies and processes of this socialist state, at all levels, must be vehicles for the furtherance of the communist revolution; and, as a key dimension of this, they must provide the means for those who were exploited and oppressed in the old society–and were effectively locked out of the exercise of political power and the governance of society, as well as the spheres of intellectual endeavor and working with ideas overall– to increasingly take part in these spheres, with the aim of continually transforming society in the direction of communism. (source)

What could be more appealing to our society of victims than this warm invitation to become the ruling class over those who have "oppressed" them? Psychologically speaking, this is an ingenious way to gain the support of all those angry Social Justice Warriors who believe that racial minorities, women, and the LGBTQ community are all downtrodden.