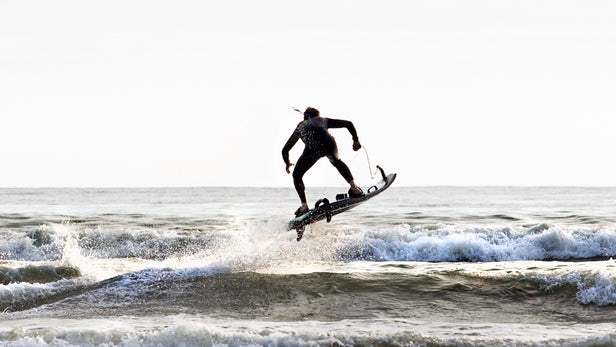 The promise of a powered wakeboard has captured the imagination of thrill seekers and water lovers alike, but there's no consensus on the best way to bring that vision to life. Some companies will tell you electric power is the solution, but Mako doesn't share that vision. Instead of volts, the Mako Slingshot relies on jet power for on-water thrills.

It sounds like the sort of thing Q would give James Bond, but the Slingshot is powered by a 100cc two-stroke engine hooked up to a direct-drive axial-flow jet drive. Top speed is north of 30 mph (48 km/h), but Mako also says the power plant has been tuned for punchy low-down torque. By way of comparison, the self-proclaimed world's fastest e-board (in 2015) tops out at the same 34 mph (55 km/h). Sounds like fun, but we'd wager the Mako setup isn't exactly quiet at full throttle.

With a 2.8-liter (0.74-gal) fuel tank, riders will be able to cruise for about 40 minutes before they need to top up with 95 RON fuel. The engine is held on easy-to-access mounting points, and Mako says there are multiple bulkheads and drainage channels to keep it clean. Measuring up at 1.88 m (74 in) long and 59.6 cm (23.5 in) wide, the board should be relatively easy to carry on the roof of a regular car.