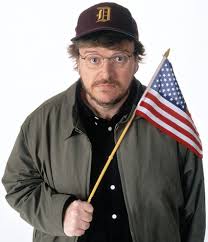 The hoofed mammal returns. Today Michael Moore angrily reemerged from his dank, Twinkie-laden bog. He's got some things to say and demands Americans offer up their ears for him to abuse. This time he's not here to lecture Trump supporters though (see Lunatic Michael Moore Compares Trump Supporters to… Racist Rapists?!). He's on a quest to protect people's rights by, drum roll please, taking away their rights!

Michael Moore is calling for a new constitutional amendment on gun control as lawmakers struggle with how to respond to Sunday night's mass shooting in Las Vegas, which left 59 dead and more than 520 injured.

In a post on his Facebook page … [he] proposed repealing the Second Amendment, which he called "ancient and outdated."

A "28th Amendment," Moore wrote, would demand that "the primary right of all people to be free from gun violence … shall not be infringed."

"As over 90% of gun violence is committed by men, in order for a man to purchase a gun, he must first get a waiver from his current wife, plus his most recent ex-wife, or any woman with whom he is currently in a relationship …" Moore wrote.

And if he's not in a relationship with a woman, he must get permission from his anime body pillow.

Annie Oakley: The Forgotten History of the Most Iconic American Woman Sharpshooter

'Y'ain't sticking me with that needle': Tom Hanks son Chet urges his followers...

How Austin Has Undergone a Pandemic Influx From Hollywood: "Growth on a Turbocharger"