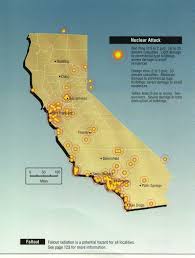 Beware of radioactive pets, and don't expect the feds to show up anytime soon.

Noting the heightened North Korean threat, the Los Angeles-area Joint Regional Intelligence Center issued a bulletin last month warning that a nuclear attack on Southern California would be "catastrophic" and urged officials in the region to shore up their nuclear attack response plans.

The report cites North Korea's late July test of an intercontinental ballistic missile that could, in theory, reach the West Coast of the United States.

The 16-page "Nuclear Attack Response Considerations" bulletin is dated Aug. 16 and marked for "official use only." It was circulated last month to Los Angeles-area local, state, and federal agency personnel and also throughout the Department of Homeland Security and other federal agencies across the country.

The idea behind the unclassified report was to share planning and guidance with as wide a distribution as possible, according to two officials involved in responding to a nuclear strike and who received the bulletin. Many agencies are involved in responding to an attack and are often staffed with personnel without access to classified information.