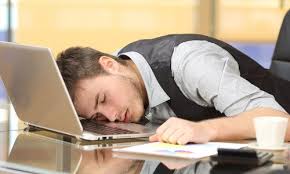 A "catastrophic sleep-loss epidemic" is causing a host of potentially fatal diseases, a leading expert has said.

In an interview with the Guardian, Professor Matthew Walker, director of the Centre for Human Sleep Science at the University of California, Berkeley, said that sleep deprivation affected "every aspect of our biology" and was widespread in modern society.

And yet the problem was not being taken seriously by politicians and employers, with a desire to get a decent night's sleep often stigmatised as a sign of laziness, he said.

Electric lights, television and computer screens, longer commutes, the blurring of the line between work and personal time, and a host of other aspects of modern life have contributed to sleep deprivation, which is defined as less than seven hours a night.

But this has been linked to cancer, diabetes, heart disease, stroke, Alzheimer's disease, obesity and poor mental health among other health problems. In short, a lack of sleep is killing us.

Professor Walker, who is originally from Liverpool, said: "No aspect of our biology is left unscathed by sleep deprivation.

"It sinks down into every possible nook and cranny. And yet no one is doing anything about it. Things have to change: in the workplace and our communities, our homes and families.

LL 2020 How math is revolutionizing medicine