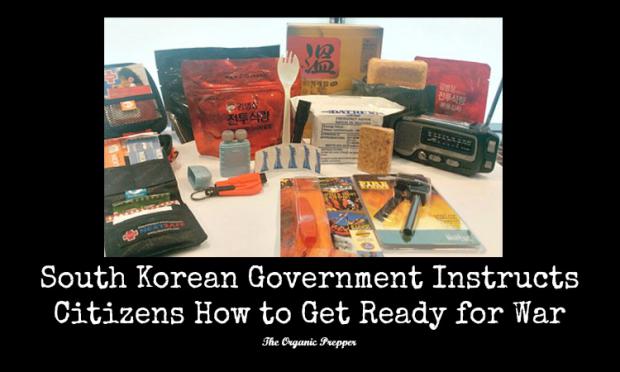 The government of South Korea is making every effort to turn its citizens into a country of survivalists. With the ever-increasing threats from the North, South Korean preppers are becoming mainstream, instead of a quirky fringe element.

Just last night, Kim Jong Un fired yet another ballistic missile over Japan, spitting in the face of international pressure. It seems difficult to imagine that he's going to just eat a Snickers and chill out. So wisely, his closest neighbors are preparing for the worst.

The South Korean President isn't taking this lying down. "In case North Korea undertakes provocations against us or our ally, we have the power to destroy (the North) beyond recovery." (source)This threat most likely will not please the Dear Leader of North Korea, so it's probably safe to predict even greater hostilities on the horizon.

South Koreans have been warned to get ready.

The South Korean Ministry of Public Administration and Security has issued guidelines for a variety of attacks to their citizens due to the ever-increasing risk of an attack by North Korea. Here are some brief quotes from the Ministry. Go here to read the whole thing.

Despite living under constant threat of war, South Koreans rarely possess emergency supply kits at home or know how to assemble one. This may be an opportunity to put one together, since it is helpful not just in war, but in other emergencies, such as an earthquake or flood.

According to the Security Ministry, the kit should at least include these items: necessary medications, a battery-powered radio with extra batteries, a flashlight, candles, gas masks, as well as food and water for at least three days…

North Korea: An Invented US Enemy, Not a Real One

'Senile Dotard': Trump & 'Rocket Man' Kim Are Back To Name-Calling As Deadline Looms

Trump Regime Wants South Korea to Pay for US Occupation