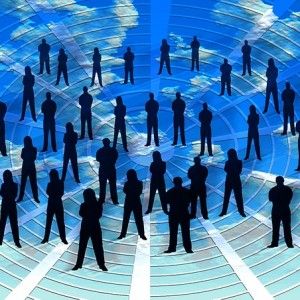 If you're familiar with the Star Trek spin-off television series, The Next Generation, starring Patrick Stewart, you know about the Borg.

A highly advanced and aggressive network of humanoid drones, the Borg is part organic, part artificial life. At birth, a Borg infant is implanted with chips and other biotechnology that gives it superior mental and physical abilities. The chips link the baby's brain to a collective consciousness, giving it seamless access to all knowledge assimilated by the Borg over thousands of years. The drone is collectively aware but loses its consciousness as a separate individual with free will.

The Borg travel in cube-shaped spaceships that seek out and assimilate technology. When a Borg ship encounters other humanoid forms, it captures them and converts them into Borg using the same technology that babies receive. Those who refuse "assimilation" are killed.

Returning to the real world, are we becoming the Borg?  We are – and we're embracing the transition.

Consider Wisconsin firm Three Square Market (32M). Last month, it announced a voluntary initiative for its employees to have microchips implanted in their hands. The company that sells kiosks designed to replace vending machines wanted to showcase its kiosks' ability to handle cashless transactions. Instead of paying with a credit card or a smartphone, a consumer could simply wave their hand across a scanner.

One analyst called 32M's initiative a PR stunt. If that was the intention, it worked, because the initiative sparked headlines worldwide.

Unquestionably, "chipping" has numerous benefits. On a video posted on 32M's website, a company spokesman outlined some of them, including:

No need to carry cash or credit cards to make payments

Identity theft protection; all data is encrypted, so that hackers can't access it

Across the country and the world, implantable microchips are experiencing increased acceptance. Implantable radio frequency identification (RFID) chips are routinely embedded in domestic animals. An FDA-approved implantable microchip is available for Alzheimer's patients and other persons deemed incapable of caring for themselves. In Sweden, Epicenter, a hub for high-tech start-ups, has made implantable microchips available for its workers and the employees of companies headquartered there. Several of my clients have informed me they've considered chipping their children so they can be tracked if they are kidnapped.

Imagine a future where you can simply wave your hand across a scanner to pay for goods or services, open the door to your home, or identify yourself when you cross an international border. The technology for that future already exists, courtesy of a patent recorded by IBM. The patent application describes a process under which every manufactured product contains an RFID tag with a unique identification number. Each number is registered to the person who buys it. IBM also proposed that the government track people through their RFID tags using a "person tracking unit." This device could zero in on RFID tags and track people in any public place.