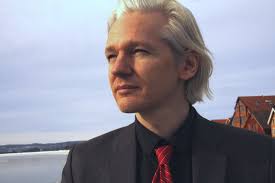 A rumor is swirling that Juilan Assange may receive a pardon from President Trump in exchange for information that would definitively disprove Russian collusion with Trump's meteoric 2016 campaign that put him in the White House.

Rep. Dana Rohrabacher (R-CA), the first U.S. representative to meet with Assange at the Ecuadorian Embassy in London, is the source of the stir. He is currently attempting to set up a meeting with the President to discuss the possibility of an Assange pardon.

The Hill cited numerous intelligence officials who stand in strong opposition to the concept. Robert Deitz, formerly a top official with both the CIA and NSA, asked, "Why on Earth would you believe Julian Assange before the intelligence community?"

It is difficult to read this question as anything but rhetorical, as Wikileaks has yet to publish anything that isn't demonstrably factual. Assange's publication is currently hosting a series of leaks revealing the full extent of the CIA's advanced hacking capabilities.

Dubbed "Vault 7," the source of this massive leak stated that they passed the information to Wikileaks "to initiate a public debate about the security, creation, use, proliferation and democratic control of cyberweapons." At issue here is the CIA's thousands of hackers, the number of which has been steadily growing since 2001. They have effectively duplicated many functions of the NSA, which is meant to operate as America's primary hacking division.

These releases are certainly causing the CIA many headaches as the public gains the ability to hold the massive organization accountable. Thus it is unsurprising that the deep state is responding to even the idea of an Assange pardon with vehement opposition. The Agency has been influencing international events from the shadows since 1953, and remains the most highly-funded arm of the U.S. Intelligence Community.

EXCLUSIVE: How a Philly mob boss stole the election -- and why he may flip on Joe Biden

Why Ross Ulbricht Must Be Pardoned