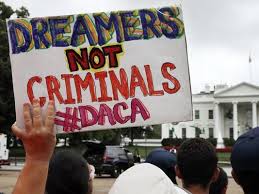 Conservative lawmakers led by Thom Tillis are crafting a bill they call the conservative Dream Act that would provide a path to permanent residency to people brought here illegally as children, offering President Donald Trump an escape hatch on one of his most vexing immigration challenges.

The legislation creates an avenue for Trump to both fulfill a campaign promise to end an Obama-era program known as DACA while yielding to what appears to be his personal desire to let these immigrants remain in the country.

"Who cares about DACA if there's a Dream Act," said a Republican involved with the policy negotiations and aware of Tillis' plan.

Trump has wrestled with the politics versus the personal on this issue since Inauguration Day, recognizing that whatever he decides to do about the roughly 800,000 young immigrants known as Dreamers will anger many and shape his legacy.

It was a year ago this week that, as a candidate, Trump promised supporters in Phoenix that he would scrap what he called an "illegal amnesty" program. But his tone changed dramatically once he became president, and he publicly shared his reluctance to put so many young people in line for deportation.

Trump is expected to end DACA as soon as Friday, but allow those who have received work permits to keep them until they expire, according to multiple people familiar with the policy negotiations.

The Tillis plan makes killing the deferred action program much more politically palatable. Republicans involved in the policy negotiations said Trump can claim a win with both his base for ending the program and the young people, for whom he promised to try to "work something out."

Details are still being worked out, but the Tillis plan would be a companion proposal to a House bill introduced by Miami Republican Carlos Curbelo.