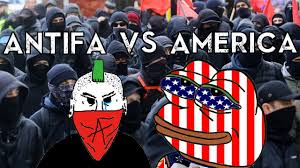 But it wasn't their actions this past Sunday that set this time apart from previous violence, it was their words.

Some of the Antifa activists who showed up at Berkeley, California chanted an alarming desire that for an end to the United States as we know it.

Their most recent slogan, "No Trump, no wall, no USA at all."

At least 100 protesters stormed the rally dressed in hooded black clothing with shields reading, "no hate."

They waved anarchist flags and busted through security checkpoints.

Berkeley police chief Andrew Greenwood told the Associated Press, "the potential use of force became very problematic." He continued that there was, "no need for a confrontation over a grass patch."

But clearly he was wrong.

Multiple people were assaulted including journalists and a leader of a prayer group.

According to Greenwood, 13 people were arrested, mostly for having items that were prohibited.

The event was intended to be a safe space for people celebrate their support for free speech. The organizer, a transgender woman and Trump supporter Amber Cummings has repeatedly denounced racism.