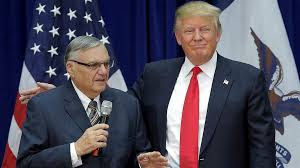 President Trump issued his first official pardon on Friday, sparing former Arizona Sheriff Joe Arpaio, who was found guilty of criminal contempt after he violated a court order in a racial profiling case by continuing to target illegal immigrants.

While both Trump and many of his supporters have applauded Arpaio, who refers to himself as "America's toughest sheriff," there is one thing he is not always tough on—pedophiles.

In fact, according to a report from the Associated Press in December 2011, Airpaio's office failed to investigate "more than 400 sex-crimes" that were reported in Maricopa County from 2005 to 2007, "including dozens of alleged child molestations—that were inadequately investigated and in some instances were not worked at all."

The report cited current and former police officers familiar with the cases who claimed that victims of the horrific crimes were as young as 2 years old. In El Mirage, the city where Arpaio's office was providing contract police services, officials reportedly discovered at least 32 reported child molestations, and even though suspects were known in all but six cases, Arpaio "failed to follow through."

While Arpaio made headlines for his infamous Tent City Jail, a camp in which nearly 1,000 illegal immigrants were forced to live outdoors in Arizona's sweltering 120-degree heat, he did not make headlines for his treatment of the children of illegal immigrants. According to the officers who worked with him, many of those children were victims of sex crimes, which Arpaio ignored, as he let their American citizen predators run free.