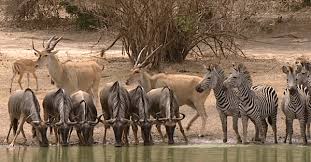 There's something I've always found mesmerizing about watching animals in the wild.

They have the most incredible instincts, honed from countless generations of survival against constant threats.

Animals have a keen sense of danger. They know immediately when something doesn't feel right, and they act on it without hesitation.

I saw an incredible example of this last year when I was visiting a remote wildlife reservation in Zimbabwe.

It was late in the afternoon on a hot summer day, and my friends and I were ensconced in a hidden observation bunker situated on the edge of a water hole.

The animals all began to arrive, one species at a time, to cool off before nightfall. First the elephants. Then Rhinos. Zebras. Giraffes. Baboons.

It was a playful mood; all the animals seemed to be enjoying the water, when without warning, there was a stillness. The gazelles froze. The zebras' ears perked.

Something wasn't right. A smell. A sound. Something.

So they got the hell out of there.

We found out later that a ravenous pack of hyenas was on the prowl nearby, so the animals' instincts were spot-on.

Our long-lost ancestors struggled against every imaginable danger. And those lessons are hard-coded in our DNA.

We sense threats. We can feel it when something's wrong.

The difference between our species and animals in the wild, though, is that we humans have way too many external influences that muck it all up.

Case in point: last week was obviously a tough one for anyone with any sense of humanity.

Acts of terrorism are scary.

And hearing about completely innocent people on a popular pedestrian promenade getting mowed down like bowling pins by some madman is definitely going to cause some discomfort.

But down here in Latin America at least, there was ensuring wall-to-wall news coverage for the next several days in a way I hadn't seen since 9/11.

This really amps up the fear factor for something that is already difficult to stomach.

So it's easy to understand why I keep hearing people say things like, "We're living through the most dangerous times in human history."

Why Americans Think it's a Good Idea to Remember to Smile ?" And New Yorkers Get a Huge Rem

Walmart, Home Depot, and Others Will Not Stop Mask-Free Patrons from Shopping

Fauci's Fraud Is On Full Display As No American Should Follow the Unconstitutional Lockdown ...

Your Body Can Produce Its Own Sunscreen, Study Confirms