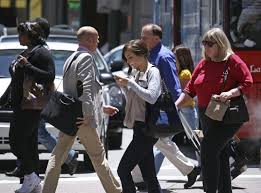 Connecticut just became the latest state with a city that is proposing making both texting and talking on the phone while walking illegal. By:  Rachel Blevins/The Free Thought Project  The heinous "crime" of "distracted walking" has become the latest trend that cities in the United States are looking to legislate into nonexistence—relying on tax dollars and the extortion of citizens to solve the problem instead of common sense.

Stamford, Connecticut, is the most recent city to join the bandwagon, and its proposal would make texting and even talking, on an electronic device while walking illegal.

John Zelinsky, a Stamford City representative who is fully in support of the proposal, claimed that its purpose "is not actually to raise money for the city, but to hopefully educate the public." He said residents will face an initial fine of $30 if police deem that they fit the description of "distracted walkers."

"They're oblivious to cars," Zelinsky said. "I don't want any more injuries or deaths as a result of pedestrians getting hit. We've had about four or five within the past three or four years."

According to CBS New York, most Stamford residents "seemed to like the idea," of the new proposal. However, residents such as Troy Latham questioned why the city feels the need to legislate common sense.

"I think that's ridiculous," Latham said. "If it's an important text message or call they're getting, like what if it's too late, what if their mother's in the hospital and they need someone to call real quick."

Friday Humor: Here Is The Democrats' Complete Legislative Agenda For The Next 2 Years

Rabo: The Second Largest Chunk In The Covid Bill Is Helicopter Money