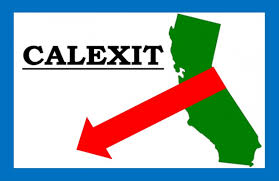 First there was Calexit. Then came Calexit II.

On Thursday, people unhappy with California's place in the United States filed yet another proposed ballot measure that could lead to the Golden State striking out on its own.

This time, the goal is convening a U.S. constitutional convention to overhaul what proponents call a moldy national blueprint out of step with life in California.

The measure says a reworked Constitution should include a provision creating a "clear and reasonable path for states to achieve complete independence from the United States should any state so choose." No state has become independent under the existing U.S. Constitution.

"The world has changed dramatically since 1787," reads the preamble of the California Calls for a Constitutional Convention, or "Cal Con Con."

Thursday's measure is the latest attempt at using the ballot box to revamp California's relationship with the federal government. A "CalExit" proposal set a timeline for votes on independence, which fizzled. A measure filed this spring seeks more autonomy, and possible independence.

The Cal Con Con team includes Marcus Ruiz Evans, who was vice president of Yes California that crafted Calexit I. He resigned this spring when the effort petered out, saying that movement's leader, Louis J. Marinelli, had become a distraction because of his ties to Russia.

Isn't strange that the south is demonized for trying to leave the union that resulted in a civil war. Yet California the liberal capital of the world find is ok to put this measure on a ballot. and no call saying how they are traitors to the US

"I'm Choosing The Risk Of Getting COVID":