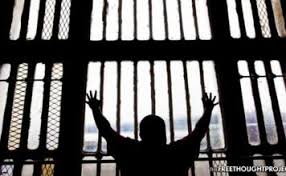 By: Matt Agorist/The Free Thought Project  Oregon — A wise person once said that insanity can be defined by doing the same thing over and over again while expecting a different result. If we apply this definition to the war on drugs, then every proponent of it needs to be locked in a psychiatric hospital. Not only has kidnapping and caging people for possessing arbitrary substances not worked — but it's made it far worse.Using government force, ie the police, to curb addiction has had disastrous results. Not only has the drug war given the United States the world record for the largest prison population but it's also given rise to one hellish police state. Luckily, however, a very small group of bureaucrats has been able to chip away at the drug war, by slowly rolling back the laws which allow it to continue.

Oregon is one such place.

A new bill, signed into law this week by Oregon Gov. Kate Brown makes personal and possession of cocaine, heroin, methamphetamine and other hard drugs a misdemeanor instead of a felony.

Oregon now joins a tiny minority of other states that have stopped throwing drug addicts in cages.

Naturally, the ardent drug warriors are furious for several reasons. First off, the District Attorney, Rick Wesenberg said, "The bottom line is that it gives drug users and abusers more freedom to break the law with less consequences."

Wesenberg is one of those individuals who fit the definition of insanity and thinks that continuing to kidnap and cage people for using drugs may some day have a different result.

"Douglas County is in opioid crisis, and in a meth crisis, and in a heroin crisis," Wesenberg said. "The governor and the Legislature just blunted law enforcement's most effective tool in combating drug addiction."

If this tool was so effective, why — over the last 5 decades — has it failed? Every. Single. Time.

Wesenberg was joined in his fear mongering by Linn County District Attorney Doug Marteeny, who said, "To change the classification of this behavior from a felony to a misdemeanor is tantamount to telling our school children that tomorrow it will be less dangerous to use methamphetamine than it is today."

Both Wesenberg and Marteeny, however, are very misguided. Research shows — as in the case of Portugal — decriminalizing drugs and treating addicts instead of caging them, can produce paradigm shattering results.

Sadly, however, instead of helping people, who clearly have physical and mental addictions and need help, most state governments still lock people in cages when they catch them with drugs.

However, research — according to many law enforcement officials — shows that the cost of incarceration, especially for repeat drug offenders, is far higher than simply treating their addiction.

The good news is that people like Wesenberg and Marteeny are quickly finding themselves obsolete. Law enforcement across the country are realizing that treatment — not cages — curbs the problem of addiction far more successfully. This includes cops in Oregon too.

As Oregon's News-Review notes, among the bill's supporters, are the Oregon Association Chiefs of Police and the Oregon State Sheriffs' Association, which said felony convictions include unintended consequences, including barriers to housing and employment. But the two groups, in a letter to a state senator who backed the bill, said the new law "will only produce positive results if additional drug treatment resources accompany this change in policy."

The good news in this regard is that cops and local governments are changing their policy — and it is working.

Oregon State Trooper Is Put on Leave For Powerful Video:

"Get The F*ck Out!": Antifa Attacks Female Reporter In Portland

Portland Begs Police to Come Back, But Nobody Even Applies. Marxism Fail…