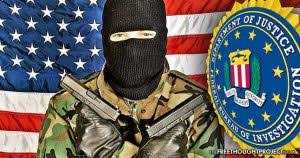 It's become a near-weekly occurrence. Somewhere in some state, the FBI will announce that they've foiled yet another terrorist plot and saved lives. However, as the data shows, the majority of these cases involve psychologically diminished patsies who've been entirely groomed, armed, and entrapped by FBI agents. Simply put, the FBI manufactures terror threats and then takes credit for stopping them.

While many of these cases have garnered attention and been exposed in the alternative media, a recent case out of Oklahoma sets a new low for FBI and exposes how insidious these plots can be.

Through the hundreds of 'foiled terror plots' the FBI has 'busted' over the years, many of them have been focused on people of Middle Eastern descent or people associated with ISIS or Al Qaeda. This time, in the case of Jerry Drake Varnell, the 23-year-old diagnosed schizophrenic, accused of attempting to bomb a bank, the FBI fomented terror from a right wing dialogue.

In a June meeting with the agent, according to FBI documents, Varnell described himself as a believer in "Three Percenter" ideology, a right wing group claiming to be committed to standing against and exposing corruption and injustice.

According to federal documents, Varnell drove what he believed was a stolen van containing a 1,000-pound ammonium nitrate bomb on Saturday morning to blow up an Oklahoma City bank. Vile, indeed.