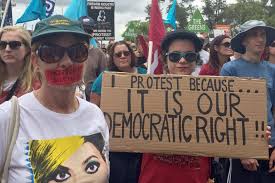 These anti-protest bills from Republican lawmakers reflect a political climate in which far-right activists increasingly find it permissible to mow down Black Lives Matter protesters and other anti-racist demonstrators.

By: Kevin Gosztola/SHADOWPROOF — A number of state legislatures have considered bills that shield drivers from liability if they run over protesters, who are "obstructing" traffic.

These anti-protest bills from Republican lawmakers reflect a political climate in which far-right activists increasingly find it permissible to mow down Black Lives Matter protesters and other anti-racist demonstrators.

James Fields, a 20-year-old neo-Nazi, drove a Dodge Charger at high speed into the back of a vehicle and through a crowd of people opposing white supremacists in Charlottesville. Fields very quickly threw the car into reverse and injured more people as he left the scene. Bodies flew into the air, and Heather Heyer, a bankruptcy attorney, was killed.

He was charged with second-degree murder in addition to "three counts of malicious wounding and failing to stop at an accident that resulted in a death." He was denied bond.

Proposed bills have not excused conduct intended to target protesters deliberately, however, lawmakers like Republican State Representative Keith Kempenich of North Dakota find the legislation to be a necessary response to protests that cross the line and become "terrorism."

Kempenich specifically introduced the bill to curtail demonstrations by indigenous activists and opponents of the Dakota Access Pipeline. He said when protesters are on roadways and challenge motorists, "that's an intentional act of intimidation—the definition of terrorism."

Dallas Goldtooth of the Indigenous Environmental Network argued the proposed bill effectively allowed "people to potentially murder another human being simply because they're standing in a public roadway with a sign."

"Those in power are being challenged — whether it's Black Lives Matter, Native resistance, the Fight for 15, or women's rights," Goldtooth contended. "That challenge causes a lot of fear."

Although the bill was not passed, the motivation behind the bill was similar to the motivation of many of the white supremacist and militia groups that marched in Charlottesville. They want those standing up for justice, especially people of color, to go away.