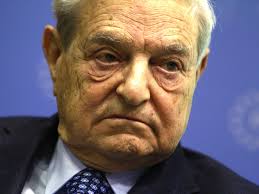 George Soros, the billionaire, "philanthropist" globalist who has been instrumental in taking down entire countries and economies is stepping up his efforts to influence the US Congress.

According to Soros funded Open Society Policy Center, in the first half of 2017, it paid out more money to lobbyists in DC to sway US politics than it did for the entire year of 2016!

The Open Society Policy Center reported spending $4.6 million in the first and second quarters, which runs from Jan. 1 to June 30, according its disclosure forms filed to the House of Representatives and the Senate. The group has three in-house lobbyists who lobby the U.S. Senate, House of Representatives, National Security Council, the Department of Defense, and the Department of State.

The policy center reported spending $19,120,000 on lobbying for policy and legislative efforts with Congress and government agencies between 2002 and 2012, which averages out to $1.9 million per year.

The amount Soros spent on lobbying shot up to $11 million in 2013, a drastic increase from the $3.4 million the group had spent in 2012. The uptick could be attributed to the group's push for "comprehensive immigration reform" during this time.

Now the group's lobbying expenditures are trending upwards again. The center is on pace to spend $9.2 million this year. …

The amount the group has spent over the last four and a half years on its lobbying efforts ($41.6 million) is more than double what they had spent during the ten-year period from 2002 to 2012 ($19.1 million)

Soros' lobbyists targeted just 3 issues from January to March and 17 different issues, including the Bill on Foreign Funded Organizations in Hungary (LexNGo), Hungary's crack down on foreign-funded organizations in the country, from April to June, according to the Free Beacon.

In April, we reported on the fact that Hungary's Prime Minister Viktor Orbán delivered a scathing indictment of the world's liberals and arguing that Hungary had the right to implement whatever immigration policies it chooses to, and that the nation also had the right to fight back against the underhanded efforts of Soros and his minions.

Contact Tracing Group Funded By George Soros and Bill Gates, Chelsea Clinton on Board of Trustees