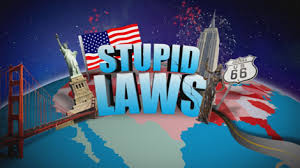 There are a lot of weird laws these days. In fact, many of them are so dumb that it seems unlikely they would ever be enforced.

But there are other weird laws that are enforced with a vengeance – even on those who are doing their best to be law-abiding citizens.

An example of the latter was recently on display in a video produced by Reason TV. The video profiles two Georgia residents – Patricia Jordan and Avi Wolf – who are both licensed gun owners. Eager to uphold the law, the two followed TSA procedures for packing, carrying, and declaring their weapons while flying.

All went well until the two tried to fly out of New York. There, they were questioned, charged, and slapped in jail, Jordan for carrying both a gun and ammunition, with each stored separately as required by the TSA, and Wolf for carrying an unloaded gun magazine, both offenses apparently violations of New York law. For Avi Wolf, that jail experience was telling as to how ridiculous his offense was:

The other prisoners couldn't believe why Avi was in jail.

"One guy beat up his wife, this other guy was busted for a whole bunch of drugs. So they're like, what did you do? Why are you here? It's like I got caught at security with an empty magazine. … [They] just laughed at me; like it was a joke."

Both Wolf and Jordan were slapped with thousands of dollars in legal fees in order to maintain their innocence. When asked if such a process was fair, the District Attorney shifted the blame to the New York legislature:

"We are not going to apologize for enforcing our gun laws. We do enforce them fairly and humanely and as compassionately as we can. … You can discuss that with the legislature. They didn't make it a crime only if there's bullets in it."

Had Thomas Jefferson known of this incident, he would likely have accused the New York legislature of holding false ideas of utility. During his time in law school, Jefferson kept a commonplace book of quotes, jottings, and other material he found interesting or useful during his studies. One of the quotes in this book came from the Italian legal mind Cesare Beccaria and runs as follows:

A principal source of errors and injustice are false ideas of utility. For example: that legislator has false ideas of utility who considers particular more than general conveniences, who had rather command the sentiments of mankind than excite them, who dares say to reason, "Be thou a slave;" who would sacrifice a thousand real advantages to the fear of an imaginary or trifling inconvenience; who would deprive men of the use of fire for fear of their being burnt, and of water for fear of their being drowned; and who knows of no means of preventing evil but by destroying it.

Friday Humor: Here Is The Democrats' Complete Legislative Agenda For The Next 2 Years

Rabo: The Second Largest Chunk In The Covid Bill Is Helicopter Money